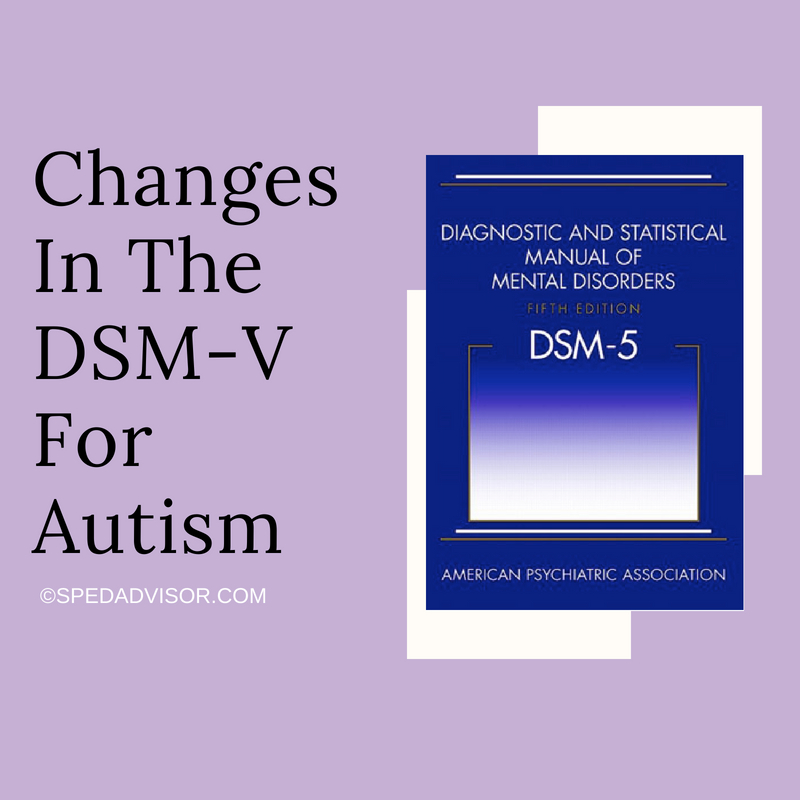 What is the DSM-V? The Diagnostic and Statistical Manual of Mental Disorders (fifth edition) which was just revised in 2013 and written by the American Psychiatric Association. The diagnostic criteria for Autism Spectrum Disorder (ASD) has been modified based on the research literature and clinical experience in the 19 years since the DSM-IV was published in 1994. It is important for teachers to know this because the DSM-5 is used in part, to determine ASD diagnosis and eligibility.

Here is a quote from the DSM-5 to further describe what the DSM-5 is:

“The American Psychiatric Association’s Diagnostic and Statistical Manual of Mental Disorders (DSM) is a classification of mental disorders with associated criteria designed to facilitate more reliable diagnoses of these disorders….

DSM is intended to serve as a practical, functional, and flexible guide for organizing information that can aid in the accurate diagnosis and treatment of mental disorders. It is a tool for clinicians, an essential educational resource for students and practitioners, and a reference for researchers in the field.”

A full pdf link can be found here DSM-5.

Here are the major changes from DSM 4 to DSM 5 in the area of autism:

Symptoms must be present in early childhood but may not become fully manifest until social demands exceed capacities. Symptoms need to be functionally impairing and not better described by another DSM-5 diagnosis.

Symptom severity for each of the two areas of diagnostic criteria is now defined. It is based on the level of support required for those symptoms and reflects the impact of co-occurring specifier such as intellectual disabilities, language impairment, medical diagnoses and other behavioral health diagnoses.

The DSM-5 includes a new diagnostic category of Social Communication Disorder that describes children with social difficulty and pragmatic language differences that impact comprehension, production and awareness in conversation that is not caused by delayed cognition or other language delays. This diagnosis looks a lot like Asperger’s Syndrome to most professionals.

Hopefully this brief overview of the changes was helpful for teachers and parents who are on the diagnois journey.
Changes In The DSM-V For Autism

2 thoughts on “Changes In The DSM-V For Autism”